To be able to save and/or share the deck you need a Game ID, if you have already registered please log in, otherwise Register for free 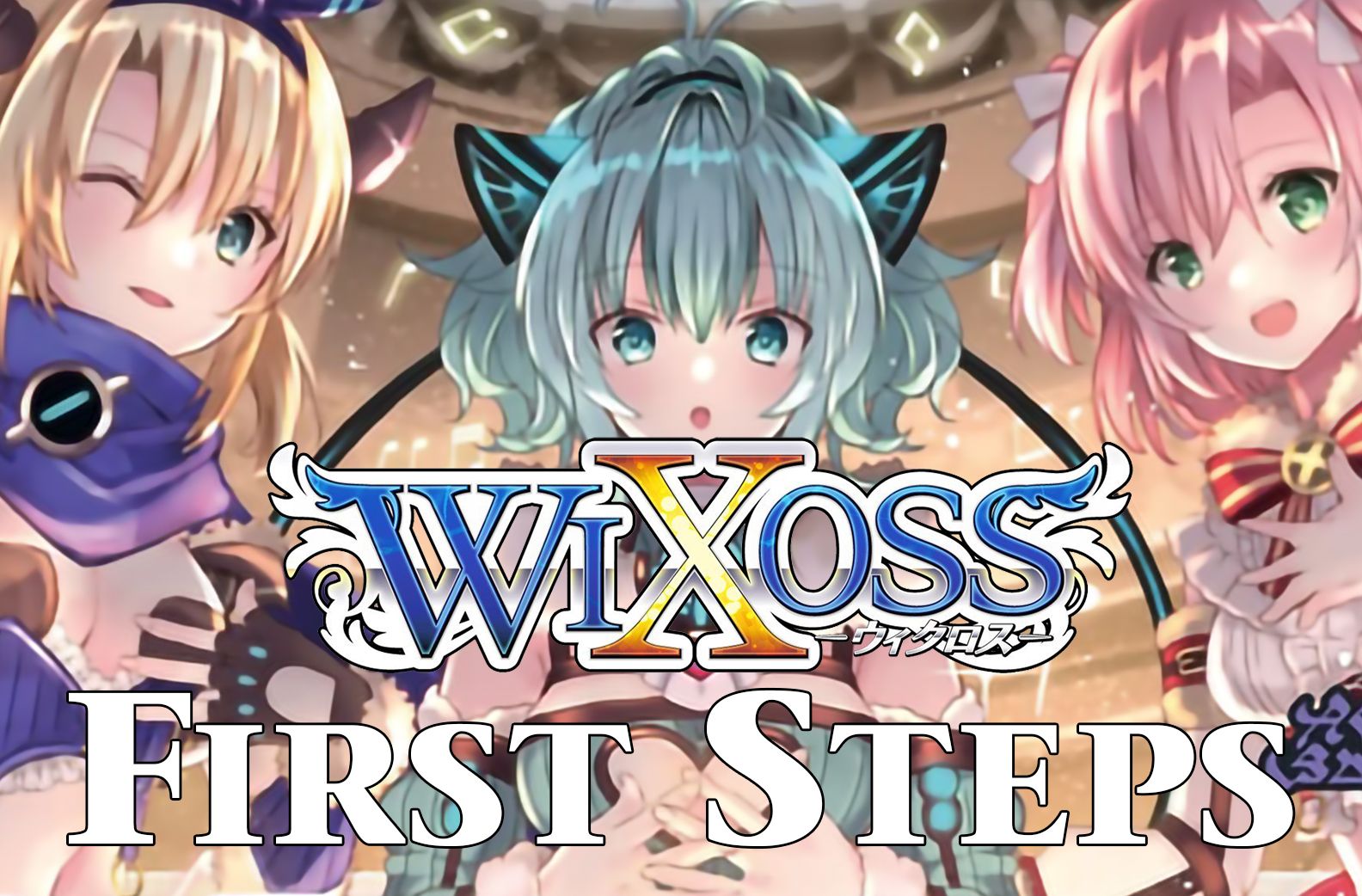 The First Steps to Learn to Play!

Before starting with the rules it is good to know how our cards are structured!

At start of the game: 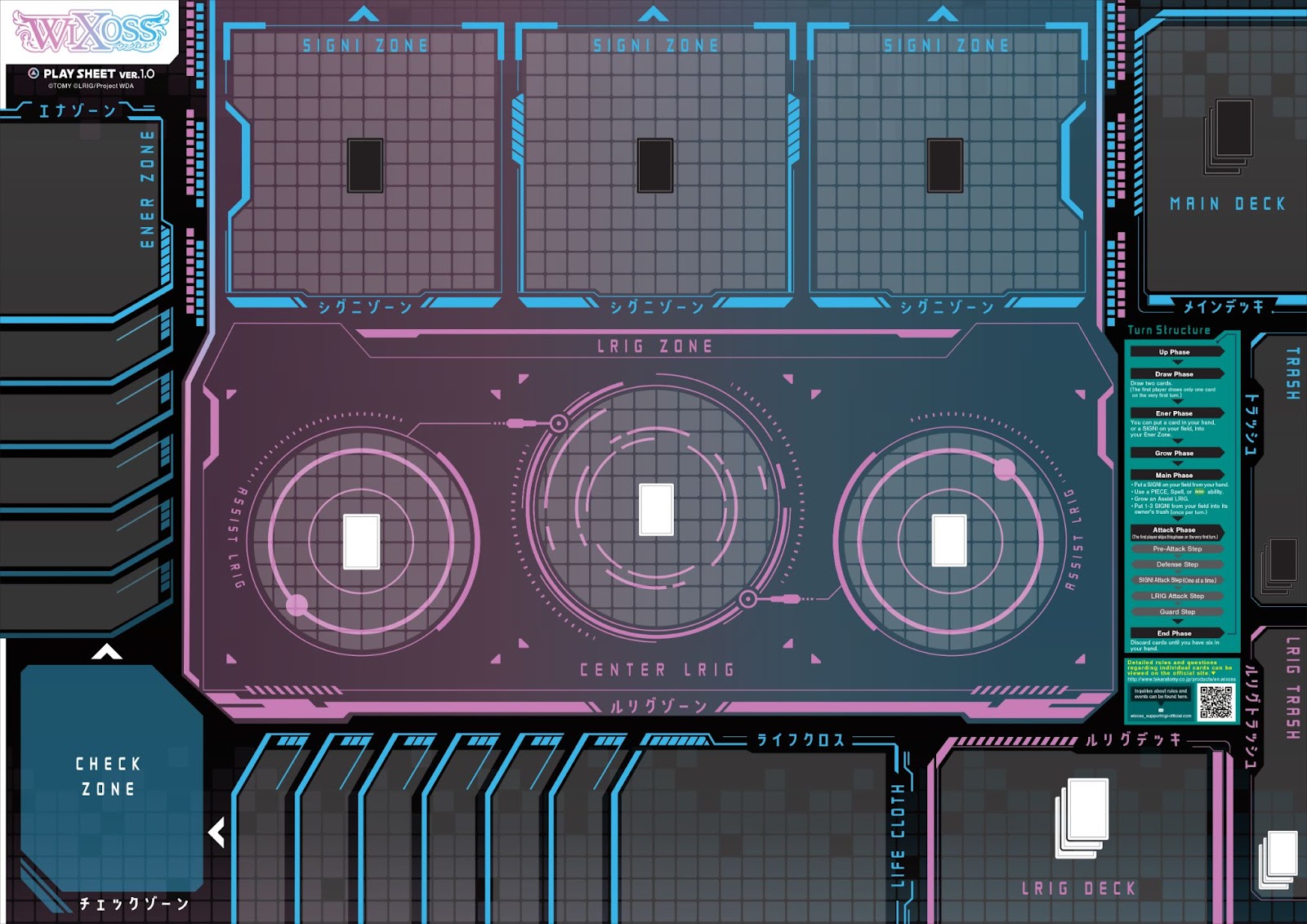 During your Up Phase, Up all your LRIG e SIGNI.

During your Draw Phase, draw 2 cards. The first turn of the game, the first player, will only draw 1 card. If there is only 1 card left in the deck, draw it and Refresh (you will not draw the second card).

During your Ener Phase you can make an Ener Charge by placing a card in your hand or a SIGNI on your field in your Ener Zone. This action is not mandatory and can be skipped. Putting a SIGNI in the Ener Zone does not count as Vanished.

During your Grow Phase you can increase the Level of your Central LRIG by 1 paying the Grow cost. This action is not mandatory and can be skipped. The only mandatory condition, in addition to specific conditions, is that they are of the same type.

Example: A Tawil LRIG will have to Grow with a Tawil LRIG, even if of a different color, the only limitation is the Type.

During your Main Phase, you can perform the following actions as many times as you like:

Also, you can remove your SIGNIs once per turn. To do this, choose a number of SIGNI in your field and put them into your Trash.

During your Attack Phase you can attack with your SIGNI and your LRIGs. The first player's first turn will skip this phase.

It consists of 5 consecutive phases:

During the Defense Step, the defending player can use cards or abilities with the [Attack Phase] condition.

During this phase your SIGNI will be able to attack the opponent's LRIG by being turned horizontally. If in front of the attacking SIGNI there is a SIGNI of your opponent they fight. If the attacker's attack is equal to or greater than the defender, the opposing SIGNI will be Vanished, otherwise both SIGNI will remain in the field.

During this phase your Central LRIG will be able to attack the opponent LRIG.

During the Guard Step the defending player may discard a Guard card from his hand to prevent 1 attack from an LRIG. If the opposing LRIG makes more than one attack, a number of Guard must be used equal to the number of attacks to be parried.

Rule-Based Actions are actions that could happen at some point in the game:

There is no order in which to perform these actions, so if more than one is activated in a game situation, the player will choose in which order to activate them.

Enter: Enter abilities are activated when a SIGNI or LRIG enters the field. No-cost Enter skills are Mandatory, while those with one are optional.

Action: Abilities you can activate during the Main Phase by paying their cost. As long as you can pay the cost, you can use these skills as many times as you like.

Constant: Constant abilities are always active, unless it has a condition.

Automatic: They are Abilities that are activated when a certain condition occurs.

Life Burst: Ability that is activated only when a card is revealed in the Check Zone by a Life Cloth. (It's not mandatory)

Ability that activates 1 time per turn.

Ability that activates 2 time per turn.

Ability that activates 1 time per game.

Ability that activates 2 time per game.

Main Phase, Attack Phase and Spell Cut-in are Abilities that activate in that specific Phase.

Life Cloths are the representation of the player's remaining lives, when you take a damage and don't have Life Cloth, you lose the game. When a Life Cloth is destroyed it is called Crushed. The Life Cloth must always be revealed on top of the others. When a card is added to the Life Cloth it is placed on top of the remaining ones. After a Crush, the Life Cloth is revealed in the Check Zone and if it has a Life Burst ability, the player who owns it can decide to activate its effects. After that the Life Cloth will be placed in Ener Zone. If there are any Skills that Crush when the defending player does not have Life Cloth, that player does not lose the game. When performing a Refresh, the removed Life Cloth will not go to the Check Zone and Ener Zone, but will go directly to the Trash.

A Team is an association of 3 LRIGs which, when used together, allow the use of specific skills. The Team is marked on the Center-Right side of the card. A player can Grow an LRIG that is not of any specific Team and vice versa.

It is not mandatory to have 3 LRIGs of the same Team, but there are Skills that require the complete Team with the following Symbols:

Assassin: An attacking SIGNI with the Keyword Assassin deals damage to its opponent while ignoring the SIGNI in front of it. This Keyword does not stack with itself or with Lancer, however it can do so with the Keywork Double Crush.

Freeze: Freeze is a state that can be imposed on a SIGNI or LRIG. That prevents it from going Up in the next Up Phase. If a SIGNI or LRIG are Up, It can attack and use abilities by down normally. If a SIGNI or an LRIG in Freeze state changes their state from Up to Down, and vice versa, they will keep the last state acquired before the end of the current turn.

Guard: Keyword present in the Colorless SIGNIs, it allows you to discard this card and not take damage from 1 LRIG attack.

Lancer: This Keyword allows the SIGNI who owns it to Crush 1 Life Cloth if it Vanish a SIGNI. Lancer does not accumulate and does not allow the resolution of Double Crush if it is present on the same SIGNI. Lancer only works if the opposing SIGNI become Vanish.

Rise: SIGNI with Rise are played in a different way from the normal SIGNI, in fact they must be placed on a SIGNI already present in your field with the conditions specified by the Keyword. If a SIGNI with Rise leaves the field, SIGNIs below will go to Trash.

Shadow: SIGNI with the Keyword Shadow cannot be targeted by your opponent's effects. Some SIGNI feature Shadow with a specification that makes them immune only to it.